Skip to content
Home » Parenting » Children » The Lies of The Elf on the Shelf
We are parents and people who believe that trust is earned. We believe that honesty really is the best policy. We think there are others who believe as we do: that with a lot more honesty, the world could be a better place. #TheHonestyThing 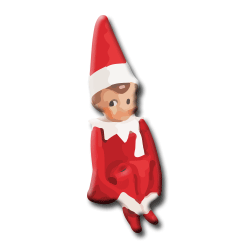 The Elf on the Shelf: A Christmas Tradition is basically a child behavior modification kit containing a hardcover book and a “scout elf”. The book explains that these elves are how Santa Claus learns which children are naughty and which are nice. Santa sends his elves out to be adopted by families in these kits. The families are to read the book, name the elf, and register the adoption online. Then the elf receives its Christmas magic, allowing it to fly to the North Pole at night and report the family’s activities to Santa Claus. Then it flies home before morning for another day’s spying activities. The family is not to touch the elf, or it may lose its magic, and not be able to fly home to the North Pole.  On Christmas Eve, the elf flies home to the North Pole, until next Thanksgiving, when it starts all over again.

However, the real truth is, the parents have to remember to move the elf around and night, and keep up the lie to their children, in order to be able to use the elf as leverage to make their kids behave.

I do have to give kudos to the authors, who self-published after being rejected from major publishers. This product is a major success story. They even got a Christmas special on network TV!

But I’m a big proponent of honesty and I have many problems with the concept:

As if the whole Santa Claus thing doesn’t give the poor children enough angst, the Elf on the Shelf adds so much more guilt. Why do we have to scare or guilt our children into being good? Values and morals can be taught without fear of Santa Claus, magical elves, or deities. There are real-life consequences for doing good deeds, being kind to others, achieving in school. Recognizing your child’s deeds and pointing out the consequences of the both good and bad actions is quite effective.

If you want your child to trust you when it really matters, don’t lie to them in exchange for one month of lazy parenting.